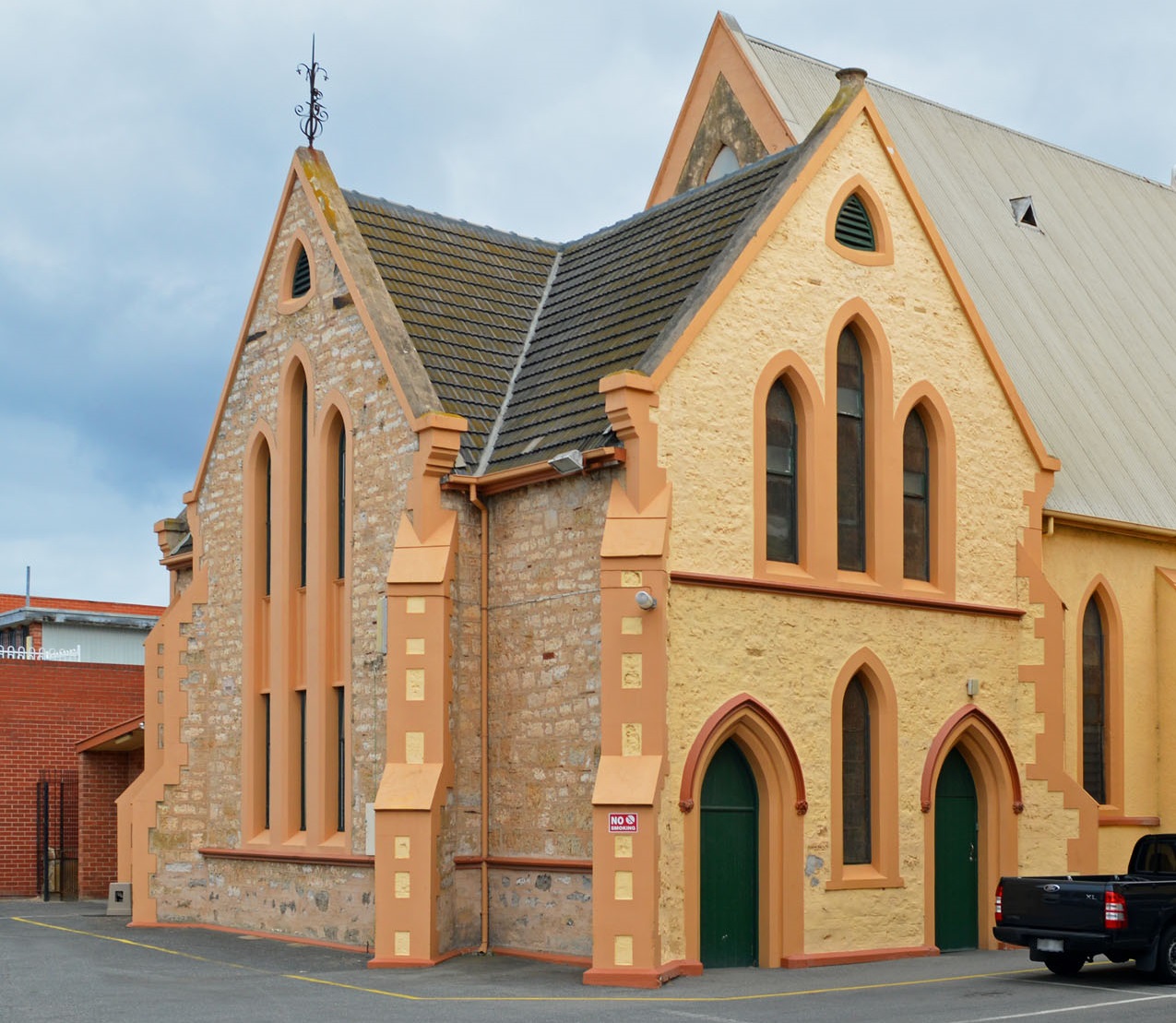 On 7th March 1848 a small, very plain building was erected and opened free of debt in Smith Terrace, (now Gordon Street) Glenelg. Then on 18th April, 1859 the foundation stone of the new church was laid. Eight months later, 8th December, the new church was opened for divine worship in an unfinished state. The final cost was 1,508 pounds. This building is now the hall and “Home” of the Friendship Cafe which opened on 18th November 1965.

present church was laid. The interior of the building is 80 feet long by 50 feet in the clear, with an average height of 32 feet to the ceiling, having a sloping floor from the entrance. The external front elevation is designed with the Italian style, and the Corinthian order. The original Mintaro slate steps and foyer are still in use. The church was completed and opened for divine service on Sunday 19th September 1880, with the Rev Charles Manthorpe and Rev W R Fletcher M.A., conducting the services morning and evening respectively. The total cost,  £6,910 / 14 / 8.

In July, 1883, the dedication service was held of an organ installed by Messrs Fincham and Hobday. The console was removed from the organ case in 1937 and
an electric action was installed. Refurbishing was carried out in 1986. The organ has 2 manuals (sweet and great) and pedal board. There are 1,068 pipes and 18 speaking stops.

In 1954, 4 shops were erected in front of the hall – a source of income for a wide range of mission causes and property maintenance.

On 22 June 1977 the Uniting Church in Australia was officially inaugurated, this church being one of the Congregational Churches which joined with the Methodist and Presbyterian churches to form the UCA. The Name “Jetty Road Uniting Church” was adopted. In October 1998 the name of the church was changed to “St. Andrews Uniting Church, Glenelg”.

Refurbishing and alterations to include the St. Leonard’s Chapel were completed November 1992.

Resources for your worship on the Sabbath – or whenever – to customise and make your own.

Add music, candle lighting, conversation with your partner, silence, journaling, or scattering the elements over the days.